Springtime is here and show season has begun!

It’s a time to drag and rotate pastures in preparation for summer grass.

It’s also a time to get ready for the first horse show of the year.

I’ll be honest, I’d absolutely love to run down the alley way at the Thomas and Mack arena at the NFR, or run a cow down the rail at the AQHA World, or jump a course at the Longines FEI World Cup. Actually, I’d love to do all three, but if i start my show season off thinking we’ll be hitting that level by the end the year, I’m going to be sorely disappointed! 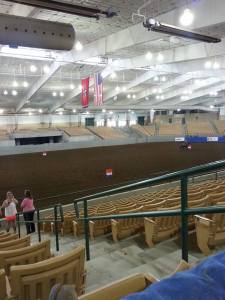 The pattern at the State finals. Ground was awesome!

Joel Sherlin who trained NBHA World Champion and RFD-TV American Semi-Finalist (2014), Bully By Design, has a saying that goes a long ways when it comes to riding horses and horse shows. Joel, who lives in Athens, Tennessee, is as down to earth as they get even though he’s somewhat of a local legend for his uncanny training ability and funny stories that all come from personal experience of course! His saying is, “Low expectations.” 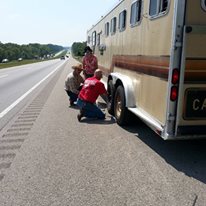 You see, just like any great horseman that’s learned from experience, Joel knows you can have the best plans in the world and the biggest dreams, and sometimes things just happen that are out of your control. For instance, you’re riding a colt at a big show and he spooks at the flash on a camera as you’re making your way along the rail and you blow your class. Or maybe you’re riding a horse that’s been hauled a lot but they spook at the second barrel when the wind flaps a banner on the rail. It happens. The key is to not let it deter you from moving forward in your goals.

I’ve hauled with Joel and his wife Nancy quite a bit and I try to learn all I can about this “Low Expectations” strategy. Obviously with their track record and number of great horses they’ve turned out, there’s something to it!

We stayed in the Sherlin’s trailer known as “The Double OO”. It’s famous!

“Low Exepctations” is really a change in mindset that’s usually brought on by the school of hard knocks – sometimes literally – and disappointments. It’s a learning experience.

One thing that I’ve noticed is that when you ride horses that have issues or need some training, you learn very quickly to appreciate the little things. For instance, if you a haul your horse to it’s first show and you stay on, it’s been a good day – never mind you didn’t even place! That’s “Low Expectations” in action right there.

Bubba earned me THE black ribbon for the horse show for his horrendous go in Trail. The following year he won me an All Round for the day!

When you’re starting a new discipline, or your new to riding in general, it’s the same thing. If you get in your class and you remember your pattern, or you make it around all three barrels still in the saddle, then you’ve had a good ride! Again, “Low Expectations”.

By now, you see where I’m going with this.

Sometimes you have to take a step back and look at where you’re at and what your base struggles are. Do you have trouble getting a lead? Does your horse struggle loping small circles? Do your horse spook every time you go into an indoor arena? Those are the simple things you can focus on now. Fixing foundational problems such as these will lead to much bigger successes later on.

The same thing goes for us a riders. What are some of the things that you struggle with as a rider? Maybe you struggle with getting the correct diagonal at the trot, or being in time over a jump. Perhaps it’s getting left behind when you come out of a barrel headed to the next one, or just not being intimidated with speed. When you break it down, all of these things really relate to strength and balance. Just like working on foundational issues with your horse, you can work on the basic issues as a rider and improve your ability over time.

As riders, we always tend to look at the end picture. What we don’t realize is that it’s all the little things that eventually produce the final success, and that’s a side effect of having a “Low Expectations” mentality. Work on those small things a little at time and eventually they all add up.

If you could do anything with your horse, what would it be? What are some simple things you can do today to improve you and your horse, and implement a “Low Expectations” strategy? 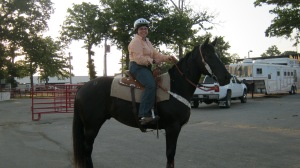